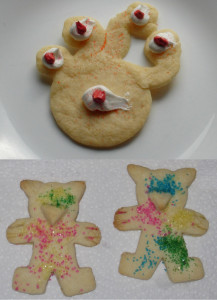 Diversity of soda options is a good thing. And when putting out a request for all your gamer geek friends to bring soda, you will discover that, by yourself, you cannot provide the same diversity of Mountain Dew products that they can.

The tavern has long been a staple of fantasy literature and role playing games. It's the hub of many an adventure and I figured it needed a ukulele song. (Note: I'm not a professional musician. I hope this doesn't curdle the milk at your house when you listen to it.)

With the advent of 4E, I'm looking at finding a way to differentiate figures on the board; there will be far more bad-guy-bodies than ever before. Rather than a player saying, "I attack the orc. Yes, that... no, that one there, the one on the left, and around the corner," I'd like something quicker and less aggravating for everyone involved.

Ideas so far include:

Chosing a direction (the table edge facing the kitchen) and labeling squares around some central point as nos. 1-8, much like you roll a d8 to determine which direction something falls on a square battle-mat. This would require having a central point, whether it be a PC-fig or a drawn object on the board.

Labeling the grid A B C D etc. along the top, and 1 2 3 4 etc. along the side, so that someone can say: "Orc at C3". The problem with this is that our board is made up of tac-tiles, which are modular puzzle pieces - the edges aren't all straight and the tiles are often shuffled around as the combat moves.

Do either of these ideas have pros/cons that you can see? Do you have any other suggestions we can consider?

The website I work for just released this subtitler game, so I thought I'd share my geekness with the world. This is only one of the ones I've made... this thing is like crack.

X-posted to hell and back.
For the last 6-7 years I have played Dungeons and Dragons with my cousins. The cool part about the system is we basically have a lot more freedom to play your character and we use a percentile rolling system. We do not go by the usual rules of the current D&D system. Well we never really played a lot of magic users over the time we have been playing. So recently me and a friend who plays with us decided to start revamping the magic system. So we started with Wizards. We've completed them and it turned around really well. We never really had a healer class because our DM didn't think it be necessary for some reason. After 4 years of begging she finally decided to give it a shot. We gave her an outline of the character and how it would be played and its almost flawless. We ran into a problem...we have no spells. So what I would like is for people to give me a few ideas. I am looking for mostly Druid spells but if anyone has a good original Necro spells that would be super.

So heres how we need it. We go to level 20 with our character. I am gonna want 5 spells for each level. Thats about it. And if possible think about how powerful the spells would be at each level. You know like...minor heal would be at level 1 or something.

I am looking forward to your replies. Thanks

Title says it all, for those who hadn't heard yet. :(

After 15+ years of gaming, someone finally bought a set of Dimensional Shackles. After looking in the PHB, and at the item description I could find nothing as to what adverse effects manacles actually had on someone (aside from these particular ones barring extradimensional travel).
So, I'm asking if anyone knows any specifics as to what disadvantages you have when you're shackled with manacles. I've speculated with the DM for this particular campaign, but he won't lend me anything beyond speculation. I checked with wizards in an email, and they basically sent back a wordy "We're not sure; we've never had the issue before."

I spent some time in email tag with the other gamers in my crew to figure out what we want from manacles, and what doesn't need to be there.

My latest catch-all idea is to emulate what rifts did with a particular set of manacles. They created a special type of armor for spellcasters, that would purposefully inhibit their ability to cast spells... welded joints, concrete mittens, and a mouthbar. I'm notgetting into all that, but it brought up a good point. Why don't we just consider manacles to be a special type of armor?
It would have a max Dex which limits reflex saves, spell failure percentage, and armor check penalties. Of course the amount of penalties would change based on how severe the manacles are: like handcuff manacles (wrist to wrist) are much more severe in penalties than wrist to chain to wrist. And similarly with leg irons as part of the 'armor' would make the penalties more severe.

Any help fleshing out an answer would really help me out.
Thanks.

I know, this isn't a cartoon group, but it seems so apropos that I had to post. How many campaigns begin this way?
( as requested, cartoon behind the cutCollapse )
Collapse